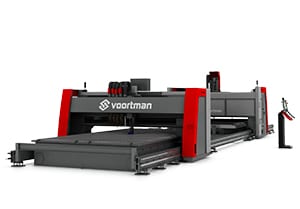 The V330 is specially designed for drilling and cutting of plates in the most efficient way. It consists of a separate drilling- and cutting table, each provided with its own independent moving gantry. Both gantries are equipped with electromagnets, to transport the plate from the drilling table to the cutting table after the drilling process is completed. The independently moving gantries allow the cutting unit to work on the drilled plate, while in the meantime a new plate is drilled on the drilling table. This results in an 80% higher production capacity compared to combined systems, and much greater efficiency.

Using synchronized servo drives with ball screws for each movement as well as a large 30 kW servo drive for the drilling spindle results in extreme acceleration. Maximum speed is reached in just a fraction of time, and maximum torque in the full range from 1 to 2.500 rpm is perfect for carbide drilling.

Every V330 comes with its own 25 position tool changing system. This feature in combination with the overall unmatched automation level of the Voortman lines completely eliminates the need of an operator being present at the plate processor.

Before drilling, thread tapping or countersinking the plate is fixed on the table by pushing it down with the vertical clamp. This keeps the plate in position and prevents vibrations caused by the drilling process.

With layout marking by milling, the machine can not only mark the part number, but also the contours and part numbers of other pieces. Additional tracing lines are easily marked on the fittings for flawless assembly.

SIMULTANEOUS DRILLING AND CUTTING OPERATIONS DUE TO TWO INDEPENDENT GANTRIES

Two main processes have their own moving gantry and their own process table. The raw plates remain idle on both the process tables. drilling and cutting operations are executed simultaneously, which brings almost a double production capacity compared to the combined systems. The fully automatic operation, even between the split drilling and cutting process, ensures an uninterrupted and efficient production process. The result is a “no-touch” total process course.

Cleaning of the plate after drilling is done with the moveable brush. With the rotating brush all swarfs are swiped from the plate into a swarf bin, to prevent from any disturbance during plasma cutting.

When a gantry is equipped with a drilling unit, a standard linear guidance as used for cutting tables is not stable enough. For this reason Voortman has designed a special guidance, which can even withstand the strong vertical forces which occur during carbide drilling. Thats why Voortman achieves much higher drilling/positioning speed and longer lifetime of the tooling.

The table consists of support legs with exchangeable synthetic strips on top. Compared to standard steel tables, the drills will not be damaged by coming through the material. The clamp at the side of the drilling table, gives more stability and accuracy during the drilling process.

Voortman uses a 260 amp power source with True Hole Technology and automatic height control standard on the plate cutting and drilling systems. Additional to this, a 400 amp power source can be installed, supplying our clients with the best possible results.

For cutting through thicker material an oxy-fuel torch is fitted on the machine. With its automatic ignition and height control even heavy parts are easy to produce.

Layout marking is possible with the plasma process. The automatic gas console switches automatically over to Argon for optimum layout marking results.

Additional to the standard available oxy-fuel torch the machine can be fitted with additional oxy-fuel torches with a maximum of 3 pieces. This allows producing of long products for use as flanges and webs in PEB’s or heavy welded sections.

The V330 has a unique feature to guarantee the accuracy of the products: a vision system. After the drilled plate is transported to the cutting table, its position will be taken according to the holes, and not the outer dimensions of the plate. The vision system’s CCD camera measures the exact position of several holes and uses these positions to set the zero reference of the plate. According to your plate nesting, the vision system will take a measurement once per plate, once per section or for each product.

The cutting table is divided into several sections to extract the cutting fumes. E-pneumatic actuators ensure that suction is only provided in the section in the vicinity of the torch.

The system allows to load several plate thicknesses on the tables. In this way maximum automation is guaranteed. Even tread plates are produced on the V330.

The cutting table has an integrated filter system with separate extraction in different segments. It extracts only there, where the cutting process takes place.

The outer dimensions of the plate are measured with two lasers on both gantries. Before each process the plate is detected and measured.